My Band, My Team, My Story

Home/Uncategorized/My Band, My Team, My Story
Previous Next

My Band, My Team, My Story 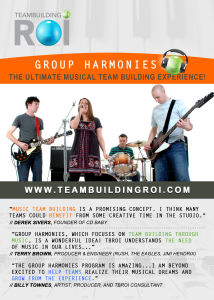 I grew up addicted to team sports…Watching them, playing them, and obsessing over statistics and standings.  I learned to read by scouring the sports section of the LA Times and the Seattle Post-Intelligencer (RIP…the print version, anyway.)

My neighborhood was populated by about 15 kids that were within 3 years of each other.  And DAMN if there weren’t some great athletes in the mix.  One of them was a 2-time Washington State Player of the Year in basketball, another (who was only there a short time) ended up in the NBA, and my next door neighbor was a top 3 state finalist wrestler.  We also had phenomenal golfers, baseball players, and more.

Needless to say, our neighborhood pickup games were competitive.  Sometimes, ridiculously so.  As I got older, no matter how good I became in my chosen sports of basketball and baseball, it was painfully apparent that I wasn’t going to the NBA or the Major Leagues.  I was “5 foot nothing, a hundred and nothing…” and destined for a different path.

So I discovered music as a way to create, and yes, compete in a team environment.  When I heard Eddie Van Halen rip the solo “Eruption,” I said to myself, “I can do THAT!”  And many years later…I could!  Yes, small hands are bad for hoops and guitars, but I quickly overcame that in both disciplines to become a proficient player.

But music was limiting when I was simply sitting on my bed learning chords and scales.  Something was missing…and I quickly realized what it was.  I needed to Share, Collaborate, and work as a Team, just as I had in sports.  So I joined a band in high school…we were known as the Green T’s (ha ha), and while John and Tom and Lenny were pretty good, I was relegated to lead singer status, and I was AWFUL.

As the years went by, I formed my own band and called it “Little King,” which is “Ryan” translated from Gaelic.  As I began to write songs, I found that they never felt right until they passed through the hands of other capable musicians.  So writing became something of a team sport, but that wasn’t where the real feeling of team came together.  That was reserved for the stage!

When you play with the same guys for awhile, the silent communication becomes a thing of beauty.  I watch bands like Rush (who have played for 40 years together), and the way they navigate through improv and rehearsed crazy time signatures, stops and starts, and other rhythmic gymnastics is the perfect metaphor for the office or the playing field.  Like an old married couple, a band on stage can feel and anticipate each others’ moves.  They can step back or take the lead, they work to enhance each others’ parts, and they are all slave to the song, which is what people really remember anyway.

TeamBuilding ROI has a program that brings teams together called Group Harmonies.  The goal is to write a song and record it within the allotted time.  We quickly split you up into smaller units, and each sub-group may be responsible for music, lyrics, artwork, production, or project management.  We bring the session musicians and the mobile recording equipment to you, and it is virtually silent, as teams record directly into the console.  It is intense, creative, and collaborative…and so much fun.  You can even upload the song to iTunes when it is done and donate the proceeds to charity!

I still make music under the Little King banner (shameless plug…my 5th little release, “OD1,” comes out this week!)  It is sometimes a solo project, as I write, sing, play guitar, and produce, but it is never a “thing” until it passes through the hands of far more capable musicians than me.

It’s not dunking in the lane over 2 guys, but it will have to suffice!